Nick Reinhart --- is an experimental guitarist from Los Angeles, California. He’s the guitar player/singer of math rock/outlier favorites, Tera Melos as well as his newly unveiled 90’s inspired pop/rock project, Disheveled Cuss. His versatility and eagerness to collaborate are evidenced not only by ongoing contributions to groups as disparate as Best Coast, Death Grips and Portugal. The Man, but by his membership in Big Walnuts Yonder, alongside legendary players such as Mike Watt, Nels Cline, and Deerhoof drummer, Greg Saunier. Whistle-stop projects, such as Bygones with drummer Zach Hill, suggest a need to strip things back to basics now and again, however momentarily. Stoking the wizardry in recent years, no doubt, has been his role as co-host of Pedals and Effects, a video blog for gadgetheads that finds Nick talking shop and jamming with The Mars Volta’s bassist, Juan Alderete.

1FOLLOW ALONGA monophonic, single oscillator in dual mode. One waveform set to square and the other to triangle. By turning the CTL 1 off, the square wav jumps down to it's unaltered pitch while the triangle jumps up to a 5th above. CTL 2 is a lower octave that effects each waveform. Become the synth you always dreamed of.
2BOUNCEAn oscillator synth set to square wave (mono), one octave below, and dynamic synth set to a detuned sawtooth (poly), tuned two 5ths above. CTL 1 adds a slight portamento to the square wave and CTL 2 adds a lower octave to the square wave. Bounce along.
32 MUCH COFFEEA dual voiced patch. INST 1 is an electric guitar voice heavily effected through 2 slicers and a distortion and is only triggered by the 1st, 2nd and 3rd strings. INST 2 is an oscillator synth in dual mode, first pitch is detuned to a 5th below and the second is standard (creates a power chord). CTL 1 is a subtle master delay that washes the mix out a bit and CTL 2 is an on/off switch for the electric guitar portion.
4ELEKTRONIQ DRAn electronic drum set controlled via the guitar. 3 voices- the 6th, 5th and 4th strings represent the "bass drum" created with a heavily filtered square wave via the dynamic synth. The "clap" sound is dedicated to the 3rd string and it is created through a noise waveform via the oscillator synth. The 3rd sound is triggered on the 2nd and 1st strings. It's a percussive "whip" sound which also uses a noise waveform in the oscillator synth and reverb. CTL 1 triggers several FX on the "bass drum," including a slicer and distortion, which give it a very nasty vibe. CTL 2 is the tap tempo for the slicer's bpm.
5SURF'S UPA wavy oscillator synth in dual mode. Square wave set to standard tuning and a triangle wave tuned up a 5th with some glide-y portamento. CTL 1 is the sound hold effect which grabs a slice of the notes and loops it, creating s stutter glitch-type effect. The switch is set to momentary. CTL 2 sets the overall envelope attack to zero, for a more staccato sound.
6GUM DROP SAWA dual voiced synth that uses two oscillator engines to create a very atmospheric tone. INST 1 is a softer sounding sawtooth while INST 2 is a grittier sawtooth tuned to a lower 5th. CTL 1 rolls of the attack of INST 1. CTL 2 engages INST 2.
7MASSSSIVEA giant synth wall using two engines- INST 1 is a polyphonic oscillator synth square wave with portamento. INST 2 is a dynamic synth square wave, tuned to an octave below INST 1. CTL 1 engages INST 2. CTL 2 engages reverb for each INST.
8LUCID DREAMIN'Single engine oscillator synth in dual mode with two triangle wave shapes, one set to a 5th above. CTL 1 engages delay, however it functions more as a random glitch type effect by slowly ramping the delay time. The direct level is set to zero, so you're only hearing the delayed signal, which gets mangled and pitch shifted between the starting and ending delay time. Playing normally while hitting CTL 1 at random times creates an interesting, "broken" sound. CTL 2 is reverb.
*This live set was created with SY-1000.
*These patches reproduce each sound as described above, but not reproduce the specific sounds. 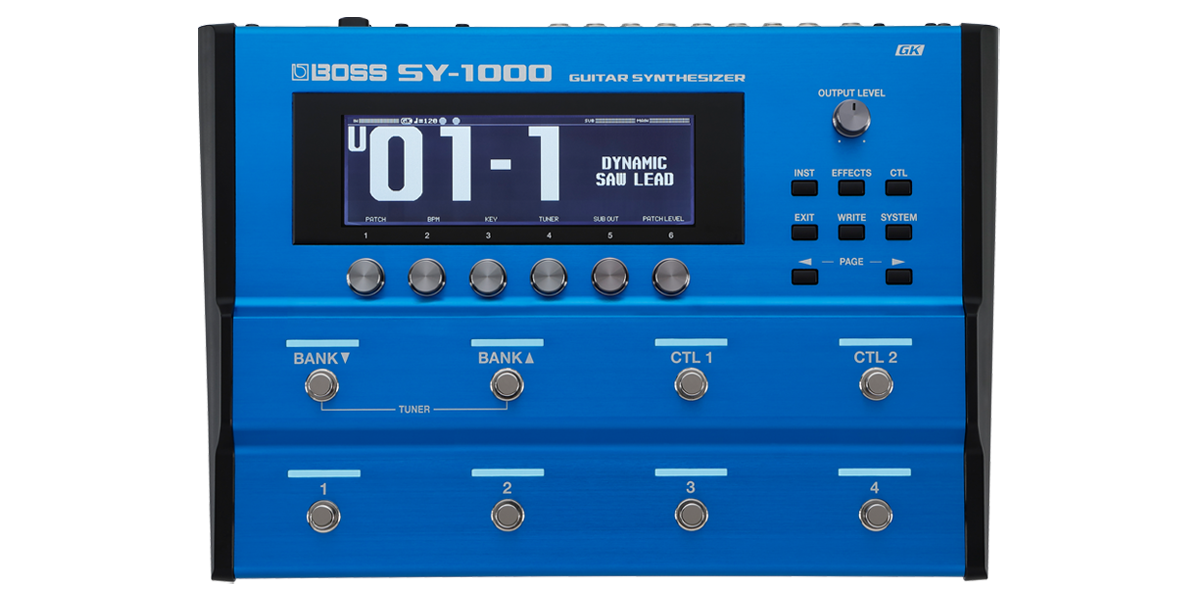